While it’s important to remember that we are all unique individuals, with our own quirks and qualities, our own good and bad habits, and our own unique experiences, we can also accept the fact that some behaviors and problems are particularly common among genders. Men tend to have one set of habits and hang ups, and women tend to have another.

Today, we’re looking at a few of the habits that plenty of married women fall into, and exploring how they chip away at the strength of the marriage – sometimes without either person noticing until it’s too late.

The unfortunate reality is that many people fall into these habits without even knowing that they’re hurting the marriage – or worse, they actually think it’s helping!

If these things sound like something you’re doing, or if you can identify some of these problems in your marriage (no matter which one of you is causing them), it’s time to stop and reevaluate – and fix these mistakes before they do irreparable damage.

It’s ok, even normal, to disagree. It’s also perfectly fine to get a little heated about things when you feel very strongly. What isn’t fine though, is exploding with rage and beating your spouse over the head with everything they’ve done wrong.

Under the pretense of “keeping the peace,” far too many people bite their tongues at small annoyances, keep their mouths shut about the things that are bothering them in an ongoing way, and just don’t say anything when their spouse leaves behind a mess, makes a mistake, says something hurtful, etc.

Where all of these small problems could be addressed directly, and likely resolved with minimal conflict – instead they’re allowed to build up and fester, until eventually there’s an explosion of accusations, blaming, dredging up problems from the past, and an onslaught of issues that can’t possibly be dealt with in a single conversation.

Instead of dealing with the little things one at a time, this approach dumps everything on the table at once. And because it’s done in such an emotional way (and the spouse on the receiving end will likely feel bombarded), there’s almost no room for hashing things out and moving forward in a way that will help resolve the problems. Instead, it’s just a fight that leaves everyone miserable.

2. Kids Above Everything Else

Of course your kids should be a priority – it’s part of good parenting to make sure your children are taken care of, that they are receiving your attention, etc., but there’s a very real downside if it’s taken too far.

Particularly for mothers, who tend to have an extremely deep connection to their children, kids can become a barrier between a husband and wife. If the mother is totally preoccupied with her children and her role as “mom,” she may start to forget about her role as “wife.” When the kids’ activities are the focus of every evening and every weekend, when a parent is preoccupied with the kids’ needs (even in the moments when they don’t need anything), the marriage gradually falls down the priority list.

When this happens, couples stop spending alone time away from the kids, they let romance and sexual chemistry fall by the wayside, and they start to exist a “co-parents” instead of a loving couple.

The kids are important, but they don’t have to sap the your ability to also be a spouse.

This one isn’t necessarily unique to women, and seems harmless enough from the start – but setting boundaries with your own parents is essential for a happy marriage.

When young couples first get married, sometimes they are happy to have all the help they can get – and for parents of adult children, helping them settle into their “married lives” is a way to keep that parental connection alive. Unfortunately though, this can very quickly cross a line and start chipping away at the quality of the relationship.

The parents who want to help with every project, who want to help pay for things, who drop by unannounced… These people can pose a tough problem to a spouse (the one who isn’t their kid). It can feel threatening, like they aren’t capable of making things work without that support structure. It can be frustrating because of the lack of alone time – or even the chance for alone time (you can’t very well fool around in the living room if your parents might walk through the door at any moment). And it can feel overwhelming, like being married to an entire family – instead of the one person you chose.

People fall into this habit without really realizing it. They’re happy to have the help and support, and because they don’t want to disappoint or upset their parents, they never say when enough is enough, or raise an issue when they are starting to feel invaded.

This is the big one – and it happens with many, many couples. When a wife gets in the habit of talking down to her husband (or even just down about him to others), it can seriously damage the relationship. This damage comes in one of two ways – either he believes you and loses his confidence, or he doesn’t believe you, and resents you for badmouthing him, spends most of his energy on being defensive, and will do everything he can to distance himself.

Now, emasculation happens in a variety of ways, but it mostly comes to down to eroding confidence and ego. If he constantly hears about what he’s done wrong (around the house, in the bedroom, with the kids, etc.), that what he’s doing isn’t good enough… if everything he does is under scrutiny, from the money he spends to the clothes he wears, it doesn’t feel like a marriage to him at all. It feels like a nagging mother, and for a grown man, there’s likely nothing attractive about that dynamic.

Many men desire the admiration (or at least the respect) of others, especially those close them – they want to feel confident and powerful, and emasculating remarks do precisely the opposite. It feels disrespectful, and if a wife is speaking to her husband this way, he can be mostly sure that she’s speaking to her friends and family about him in this way too – which only further damages his confidence (or makes him bristle against the less-than-kind spouse).

You don’t have to inflate is ego, but you don’t have to trample it at every turn either… It will either drive him away, or he will feel so beaten down that the mistakes and passivity that cause the complaints will only become more of who he is – it’s a vicious cycle.

Surely there are other bad habits that people, particularly women, fall into that put their marriages in jeopardy, but the items on this list are among the most common, and the most devastating. Keep yourself in check by giving your marriage the occasional evaluation. Are your actions/habits helping or hurting the quality of the relationship? 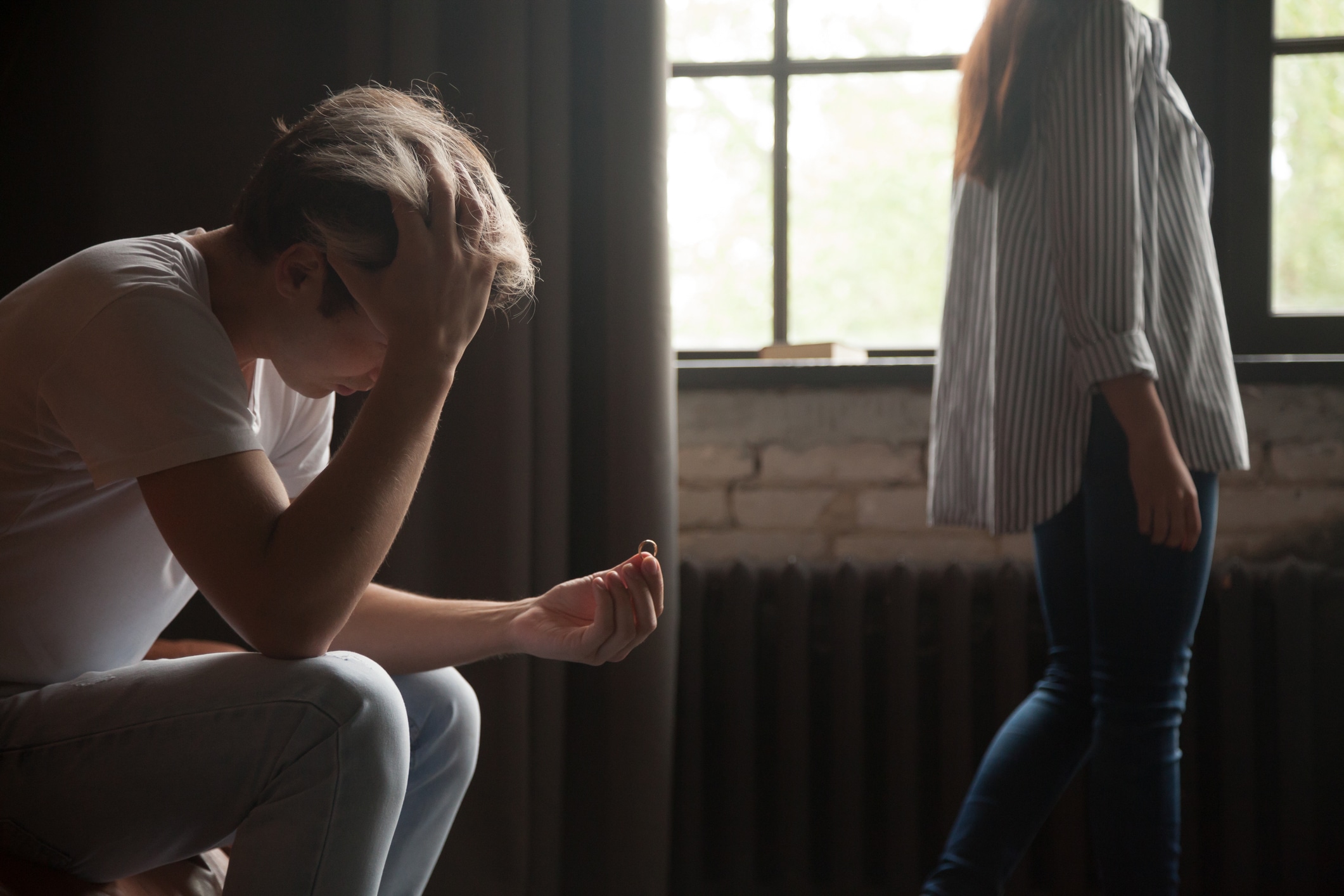 How Women Cause Divorce – 4 Common Mistakes

Divorce can happen for a huge range of reasons, and every couple is a little bit different. In most cases, though, dissolving a marriage is – to some degree – the “fault” of both members of the relationship. You both contribute to the climate of the marriage that leads to divorce… But sometimes one party […]

My husband has been saying he is moving out since early December. Says because we have not had an intimate relationship in about 9 mos he has no intimate feelings for me. We are both 50, have been married 22 years. Have 2 teenage children. He says he hasn't left yet because he doesn't want to hurt me or the kids. Help!!!!! I'm a wreck!!!

My wife says she loves me but rarely shows it , sex is none existent. We have two sons both in their twenties who still live at home , they are pretty selfish and never give us anytime on our own , my wife doesn't seem to mind, in fact if I bring it up she leaves the room and makes excuses for them.

Hi Lillians - There needs to boundaries with you and your children, and you need to working together to get them on their own two feet so you both can reconnect. Is she having a mid-life crisis? https://www.strongmarriagenow.com/save-marriage-spouses-feelings-changed-feel-blindsided/

Is there something preventing you from being intimate with him? Or has it been his choice? Is he suffering from a midlife crisis? https://www.strongmarriagenow.com/midlife-crisis-threatening-marriage/

How about if I am just done? I don't want this crap marriage any more but worry about his mental health if I leave? I do not love him, I don't even like him as a peraon. He is judgmental and emotionally abusive I don't think I should have to try anymore . what about that? I have tolerated 7 years of physical and mental abuse and after his bi polar diagnosis and arrest he decides he is ready to change? Well I don't care anymore. Is that wrong?

Hi Sad - While we are pro-marriage, we never advise someone to stay in an abusive relationship. Can the person change? Possibly, but you should have to go through it. It's your choice. If you do decide to stay, and help your husband through this, here is some advice on dealing with mental illness and your spouse - https://www.strongmarriagenow.com/health-issues-harming-marriage/